Peppercorns, which are dried unripe fruit from the vine Piper nigrum, are ground to make it.

It has a sharp, moderately spicy taste that complements a variety of dishes.

Black pepper piper nigrum, on the other hand, is more than just a kitchen favorite. Owing to its high concentration of active, beneficial plant compounds. it has been dubbed the “king of spices” and has been used in ancient Ayurvedic medicine for thousands of years. In cooking, both whole and ground black peppercorns are widely used. Black pepper can act as antioxidant properties and provide a variety of health benefits in addition to adding flavour to foods. 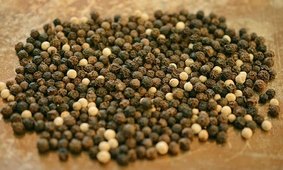 Black pepper was highly prized in ancient Greece and Rome, and its importance grew even further during the Middle Ages and Renaissance.

Vietnam produces around 39% of the black pepper in the world today. Indonesia accounts for about 15% of global output. While India and Brazil each account for about 10%.

This essay discusses the advantages, side effects, and culinary applications of black pepper.

Black pepper benefits is more than just a taste enhancer. its bioactive compounds, the most significant of which is piperine, have health benefits. Black pepper’s pungent flavor comes from piperine, a natural alkaloid. That’s also the primary ingredient in black pepper, which gives it its health-promoting properties. Piperine is an antioxidant that aids in the prevention of chronic diseases such as atherosclerosis, coronary disease, and neurological disorders.

Additionally, this compound improves food bioavailability. You will increase the amount of nutrients ingested into your bloodstream by adding black pepper to your meal.

Black pepper stimulates hydrochloric acid in the intestine, allowing you to chew and consume the food more effectively. It also has carminative properties, which tend to relieve gas and inflammation in the intestines.

A healthy immune system is critical for avoiding sickness, and black pepper can help with that. White blood cells, which the body uses to ward off attacking bacteria and viruses, are boosted by its active compounds.

It has the potential to reduce cholesterol levels.

High blood cholesterol has been linked to an increased risk of heart disease, the world’s leading cause of death.

Animals have been tested to see whether black pepper extract would lower cholesterol levels.

Rats fed a high-fat diet and a black pepper extract had lower blood cholesterol levels, including LDL (bad) cholesterol, after 42 days. The monitoring group did not experience the same results.

Additionally, the health benefit of pepper and piperine is thought to aid in the absorption of dietary supplements such as turmeric and red yeast rice, which have potential cholesterol-lowering properties.

Black pepper, for example, has been shown in experiments to improve the absorption of curcumin, the active ingredient of turmeric, by up to 2,000 percent.

More research is required to see whether black pepper has any important cholesterol-lowering properties in humans.

The so-called Piperine has been shown in studies to assist with blood sugar metabolism.

In one study, rats given a black pepper extract had a lower blood sugar spike after swallowing glucose than rats given a placebo.

Furthermore, 86 overweight people who took an 8-week supplement containing piperine and other compounds had substantial increases in insulin sensitivity. Which is a test of how well the hormone insulin extracts glucose from the bloodstream. However, since this analysis used a mixture of multiple active plant compounds. it’s unclear if the same results would occur with black pepper alone

It may be beneficial to the brain.

It’s has been shown in laboratory research to increase brain function. It has shown promise in treating symptoms associated with degenerative brain diseases such as Alzheimer’s and Parkinson’s disease.

Piperine, for example, was shown to increase memory in rats with Alzheimer’s disease. As the distribution of piperine enabled the rats to run a maze more effectively than rats who were not given the compound. The food components extract appeared to reduce the aggregation of amyloid plaques in another rat trial. Piperine extract seemed to reduce the accumulation of amyloid plaques in a rat trial. Which are thick clumps of damaging protein molecules in the brain attributed to Alzheimer’s disease.

However, human trials are needed to confirm whether these results can be seen outside of animal studies..

The active compounds in this pungent spice include oleoresins and alkaloids such as piperine and chavicine. It also contains antioxidants, flavonoids, essential oil, and other phenolic compounds that aid in cell protection and digestive health.

Black pepper nutrients are also including the vitamins and minerals mentioned below:

A teaspoon of black pepper contains the following ingredients:

Things should Be Aware Of

How to use black pepper 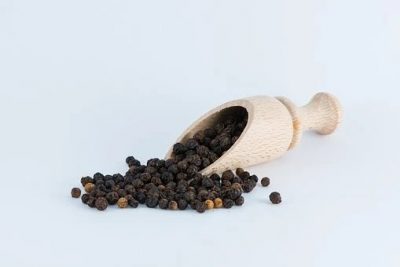 When making a meal, ground your own pepper from peppercorns wherever possible. Compared to pre-cooked black pepper, freshly ground black pepper has further health benefits. Using a new peppercorn means that you’re consuming plain black pepper rather than pepper combined with other ingredients.

Is black pepper bad for you?

When eaten by mouth in quantities typically contained in foods, black pepper is LIKELY healthy. When consumed by mouth as medicine and when the oil is added to the scalp, black pepper healthy and is POSSIBLY SAFE. Black pepper oil is usually free of side effects. It’s possible the black pepper has a fiery aftertaste.

Side effects of Black Pepper

Black pepper oil is usually free of side effects. It’s possible the black pepper has a fiery aftertaste. It has been stated that taking massive quantities of black pepper by mouth, which can unintentionally get into the lungs, can result in death. This is absolutely fundamental to kids.